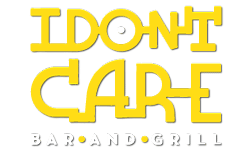 I Don’t Care is a unique Bar and Grill located about 6 miles east of the Hard Rock Casino off of Highway 412 (11015 E. 590 Rd).  We are a family friendly bar & grill in Catoosa, Oklahoma with delicious food, excellent cocktails, a great selection of beer, with fun and attentive servers!

As the story goes, when Bill McAnally asked his wife, Paula, where she would like to eat over the years, her response usually was, “I don’t care.”  So, when McAnally decided to build a new restaurant last fall, the name for him was obvious: I Don’t Care Bar & Grill.  “Now we can go straight there,” he said.

I Don’t Care Bar & Grill is located just off U.S. 412 on a street variously known as 590 Road, 412P and Ben Lumpkin Road. It’s about seven miles east of Hard Rock Hotel & Casino before you reach the Verdigris navigational channel.

It also is the site of the McAnallys former home of more than two decades on the south side of the highway. Their new home is on a hill on the north side of the highway.  “The state took most of my property on this side five years ago in eminent domain so they could expand the intersection some day,” McAnally said. “They left me 1.4 acres, but the house was in the way.”

For the past five years, McAnally has been gazing down on his property across the highway, wondering what to do with it.  “I’ve had an excavation and ready-mix business for years,” he said. “I sold the ready-mix business, and lately I’ve been getting bored, so I decided to build the restaurant for something to do.”

Because he did not have a background in the restaurant business, he hired Levi Randolph as general manager and Gabriella Millan as assistant GM.  Randolph said his grandfather founded Charlie’s Chicken in Muskogee, and he worked for that business for 20 years. He then spent a few years at Chili’s before taking the job at I Don’t Care. Millan’s background also was with Chili’s.  Randolph and Millan admitted it seemed a risk to head up a restaurant in a rather remote location, but McAnally persuaded them people would come. McAnally was right.

The dining areas are a mix of rustic and modern, rough and smooth woods, a rock fireplace, changing LED lights over the bar and enough televisions that every seat has a view.  Bar stools at the 15-seat bar and high-top tables are high-end models from Gasser that are both attractive and comfortable.  The menu is mostly traditional American — steaks, catfish, shrimp, burgers, sandwiches, appetizers and salads. Six Mexican dishes recently were added for more variety.

*This is an excerpt from an article by Scott Cherry, Tulsa World newspaper writer*